Come chat with us in IRC!

Come in and shoot the shit at #ReviveDC on irc.freenode.net!

Disc rot is something that's spoken of in hushed tones; you'll typically find discussions regarding laser rot, an issue that plagued LaserDiscs. When you do come across a discussion of disc rot, it's typically dismissed as a myth, something that plagued early CDs and is no longer an issue.
The truth, of course, is far different. If you've ever had a disc that was largely scratch free and still wouldn't play, it's unlikely that you held the disc up to the light and checked for disc rot. 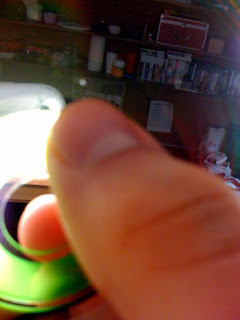 An example of disc rot on my copy of Jet Grind Radio.
Checking for disc rot is simple; hold the disc up to a bright light. If you see light shining through, as in the image above, congratulations are in order; you have disc rot. Disc rot does not always render a disc immediately useless. If the disc has redundant data, the damaged section could be found in another area of the disc. Unfortunately, once you have disc rot, it can and likely will continue to spread, eventually rendering the disc useless. Disc rot stems from manufacturing issues, and there's nothing you can do.
Out of the collection I currently have with me, 29 discs, four are afflicted with disc rot. They remain playable thus far, but who knows for how much longer. While four out of 29 isn't a terrifying amount, about 14%, I have gone through three different copies of Code: Veronica that have had this issue, and one of the affected discs happens to be... the first disc of Code: Veronica.
Disc rot poses a problem to collectors, especially in the age of eBay. Most sellers do not check for disc rot, and are unaware of it. My copies of Code: Veronica that had disc rot came from eBay sellers, who listed the disc as mint condition. This wasn't a lie, but disc rot can affect the game at any point. As a collector, your best course of action is politely emailing the seller and asking them to check for the problem.
While I don't completely condone Dreamcast piracy, this issue should be of utmost importance. GD-ROM discs were not manufactured for a large amount of time, and the process was likely never entirely perfected. Who knows where original GD-ROMs will stand in terms of disc rot in 20 years? It's especially important for rippers to create GDR images that contain all of the original data, and creating perfect rips where possible.
Posted by comradesnarky at 12:47 PM 1 comment:

Gameplay
Street Fighter III may be oft forgotten except in tournament play because it's an incredibly deep and technical game game. There were several changes to the gameplay that only expert players can perform. Most notable is the parry system, which is perhaps the reason the game is so beloved by myself and tournament players. The parry system blocks an attack with no resulting chip damage. However, performing parries requires incredible precision; the default parry time is 4/30ths of a second. Super and Super Art inputs are also far more accurate; you're not going to get away with sloppy inputs here as you can in II or IV.

Street Fighter III: Third Strike is really the complete package, as far as fighting games go. The game features an extensive customization menu which allows you to completely change the way the game plays. It's really too much to go into casually in a review. You can modify commands to be similar to the earlier revisions (2nd Impact, particularly), and if you're more of a casual fighting gamer, you can ease the parry timing to explore the more complex systems of the game without hours of practice.

Additional Notes for Team RDC's Third Strike Arcade Edition and Offline Edition
A huge mistake with the Dreamcast version of Third Strike was the removal of Urien's unblockable, which Capcom regarded as a glitch. This is the main change in arcade edition, but it is an important one for Urien players. The removal of the unblockable dropped Urien from the high tiers and made the game unsuitable for serious tournament play. Fixing this glitch makes Arcade Edition the superior version of the game. CD AGES also discovered that Oro's unblockable is possible in this version.

Storyline
Completely irrelevant and indecipherable. Tournament, bad guys, fight. That's all you need in a game such as this one.

Controls
In a word, smooth. Easy to learn, yet difficult to master. My primary complaint stems from the Dreamcast's analog stick. Due to the stick being convex, your finger will often slip, and commands are very hard to input. I would highly recommend using the d-pad, or investing in an arcade stick. If you've played Street Fighter, you're going to be right at home.

Graphics
Street Fighter III is one of the most beautiful sprite based games you're going to play. The animations here are incredibly fluent and I do not hesitate to say, smoother than Street Fighter IV. The smoothness of the animation really becomes an aspect of the gameplay, when you get skilled enough to take advantage of the parry system. Street Fighter III supports the VGA box, which makes the graphics stand out even more.

Sound
This game has some truly excellent music, depending on your tastes of course. You'll no longer hear the same song in every round of a match as you did in prior games. Each round has its own unique remix of the stage song. On the sound effects front, hits sound appropriately fierce as they should.
Additional Notes for Team RDC's Third Strike Arcade Edition
Since I originally wrote this review, my opinion has soured on Third Strike Dreamcast's music. That's why Arcade Edition got rid of the arranged music and uses the arcade soundtrack. The quality of the arcade music is very compressed, even on the arcade board, which is a count against it, but the quality of the music is far better. Yun and Yang's stage in particular is vastly better; I always hated the arranged version, and it's a relief to hear the arcade version play.
Additional Notes for Team RDC's Third Strike Offline Edition
There are some really great remixes here. I recall in comments on reviews for Online Edition that a lot of people said the remixes were awful. I don't think that's true at all. A lot of them are very different from the originals, but these are high energy electronic remixes and I love them. The only real strike here is that Gill's stage isn't remixed. Other than that, this is a great remix.

Conclusion
So why was Street Fighter III largely forgotten? It's perhaps a combination of being on the Dreamcast during its initial release, its varied roster and its tendency to sway towards the more hardcore of the fighting crowd. Does this make it a bad game? Absolutely not, it's likely the best in the series. Hardcore and casual fighting fans alike should pick this up. I'm deducting a half a point merely for its hardcore nature, and its roster of characters, of which not all are necessarily competitive (or useful).

SoulCalibur is one of those games I have that doesn't get a whole lot of attention. I've been on a big fighter kick lately, but I'm not much of a 3D fighter fan outside of Capcom's offerings and the Dead or Alive series (read: not a fan of Namco).
Why I own copies of SoulCalibur and Virtua Fighter 3tb (and a sealed copy of PSO V2) is a funny story in and of itself. Apparently after a party one night, I decided to surprise my sober self by ordering several Dreamcast games off of eBay and deleting the purchase notifications from my email. I was pleased with PSO (which I had sunk several hours into on a less than legitimate copy) and Virtua Fighter (probably because I've never played the arcade one), but I felt pretty indifferent about SoulCalibur. I had played it plenty before and simply lost interest. It had been lamenting on my shelf for a few years, and I decided to throw it in the other day to find I didn't even have a save file for it.
I've been amazed at the sheer amount of options available for the game. For a fighter, there's a lot of game here. There's several modes to be unlocked, and the mission mode is a plenty satisfying distraction. The small tweaks to the gameplay, while gimmicky, do add incentive to play. There's a decent amount of variety among the characters, though some are clearly overpowered (which has been one of my gripes about SoulCalibur).
So thank you, drunk comradesnarky, for the pleasant surprise, even if I'm only appreciating it now a few years later. I'll try and get a review up soon, and I'll be posting an older review I did of Street Fighter III: Third Strike that I wrote a while ago, after some tweaks.
Posted by comradesnarky at 1:49 PM No comments:

Welcome to the RDC Project

For the....?th time, I'd like to formally announce the ReviveDC Project.
The Dreamcast scene is often times a murky one, and we'd like to make it a bit easier to manage. There's a wealth of information out there about the Dreamcast, and it's the intention of RDC to consolidate that information into one location.
Information isn't our only aim; there's a reason why Sega is held dear in many gamer's hearts. The Sega of old had a one of a kind style; frantic arcade style games, that often had surprisingly deep game play. Sega wasn't afraid to experiment either. The Dreamcast birthed some of the most original games of all time, from Sega's first party studios as well as third parties. Our intention is to never let that fade from memory. The world has changed a lot from the time the Dreamcast launched, and we want to keep it relevant.
RDC will aim to do many things, including:
-Providing high quality scans of Dreamcast cover art and creating custom DVD sleeves.
-New reviews of old games, done in a more modern style. Reviews have changed a lot since 1999.
-A complete database of game information, hosted on Wikia.
-Provide reviews of homebrew games, and which are worth your time. There are many out there, and it's sometimes a daunting task to commit to exploring them due to the sheer number of them.
This is not all you can expect. There are other things that I plan on, but I'm debating how to implement them.
Here's how you can help:
If you want to write for RDC or edit the Wikia, please comment on this post. Posting will be public so that you don't have to have a blogger account. The Wikia is created, but it is currently locked until more content can be added. I want to start a forum as well. If you search with Google, you can find an old forum I started, but never did anything with. I didn't think it was the best host. If you can, recommend a free service. I have ideas for how to fund an actual site but at the time, I'm not sure how feasible it will be.
Content posting will begin soon. Thank you for reading, and be sure to check back every day.
Posted by comradesnarky at 7:40 PM 2 comments: